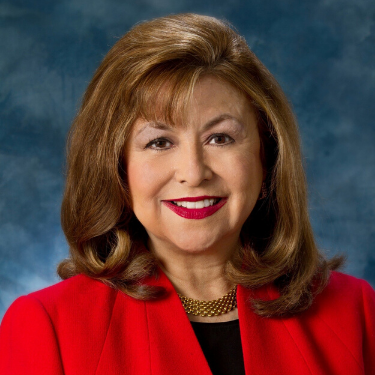 Ms. Montoya is a Harvard-trained attorney who has been nationally recognized as one of the top lawyers in the country, and she is a former award-winning television commentator. She is currently working on a book about the importance of incorporating Latinos into the economic, political and social fabric of America, and she is a frequent public speaker on a wide range of issues including healthcare, poverty, diversity and children.

Ms. Montoya ran for Mayor of Dallas in 2019, the first Latina to run for this position. Most recently, Ms. Montoya was the Vice Chair of the Board of Directors of the Dallas/Fort Worth International Airport and was the Chair of the Dallas Mayor’s Task Force on Poverty. Under her leadership, the task force identified key drivers of poverty and presented several recommendations to reduce poverty and close the opportunity gap. One of its greatest successes was creating a systemic and operationalized approach to reducing the child poverty rate from 38% to 31%, and it played a pivotal role in shining a light on the pervasive social and economic impacts of poverty on Dallas residents.

One of the first Latinas to earn partnership in a major corporate law firm in the United States, Ms. Montoya received the Lifetime Achievement Award from the Texas Minority Counsel Program of the State Bar of Texas. In addition, Ms. Montoya was awarded the Latina Lawyer of the Year by the Hispanic National Bar Association, the Women’s Advocacy Award from Legal Aid of NorthWest Texas, the La Luz Achievement Award from the Dallas Hispanic Bar Association, and the Pioneer for Justice Award from the Los Angeles-based Mexican American Bar Foundation.

In 1993, Ms. Montoya served in the White House as an Assistant to the President and Director of the Office of Intergovernmental Affairs. In 1998, she was nominated by the President to serve as a U.S. Representative to the 53rd Session of the General Assembly of the United Nations.

Previously, Ms. Montoya served as the Senior Vice President, External Relations and General Counsel at Children’s Medical Center of Dallas, the seventh-largest pediatric health care provider in the nation. In addition, she was the chief executive officer of the New America Alliance, a national nonprofit organization whose mission is to promote the economic advancement of the American Latino community.

A leader in the nonprofit community, Ms. Montoya is the immediate past-Chair of the Board of the Mexican American Legal Defense & Educational Fund (MALDEF). She is a member of the Board of Directors of Girls Inc. (National Board), the Texas Book Festival, the Center for Public Policy Priorities, the Dallas Arboretum and Botanical Society, Inc. (Secretary of the Board), Dallas Education Foundation, SMU Tate Lecture Series, and she serves on the Texas Lyceum Advisory Council. In addition, Regina is a Hunt Institute Distinguished Fellow at Southern Methodist University.

Ms. Montoya has received numerous awards for her corporate, philanthropic and nonprofit accomplishments. Among her awards are the Harvard Alumni Association Award, the Susan B. Anthony Award from the League of Women Voters of Dallas, the “Can Do!” Award from the Wilkinson Center and the Girl Scouts of Northeast Texas Real Woman Award. Ms. Montoya has been recognized by numerous publications for her achievements, including Hispanic Executive Magazine, which featured her on the cover of its July/August/September 2014 edition and Hispanic Business magazine, which twice named her one of the 100 most influential Hispanics in the US.

Ms. Montoya has extensive electronic media and communications experience, having served as a panelist on Between the Lines and On the Record, KERA-TV (PBS), the host of Nuestro Dia, WFAA-TV (ABC-TV), and as a TV Political Analyst, KDFW-TV (Fox-TV). For her work on Between the Lines, she and her co-panelists were awarded a Texas Katie Award from the Press Club of Dallas (Major Market Television Interview/Talk Show).

Ms. Montoya earned her B.A. from Wellesley College, where she is a Trustee Emerita, and her J.D. from Harvard Law School. She also has served as vice president and elected director of the Harvard University Alumni Association.